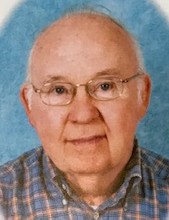 We are sad to let you know of the passing of long-time PABI treasurer and advisor Jack Gallagher.  Our Community Center would not be here without his hard work and dedication.    John “Jack” Gallagher, 84, died peacefully at his Beaver Island home on January 19, 2020. The eldest of eight children, Jack grew up in Dearborn, Michigan with his parents, Austin Gallagher and Winnie Carney Gallagher. After graduating from Fordson High School he attended the University of Detroit, earning his baccalaureate degree in accounting. After two-years of service in the U.S. Army, he returned to work, began raising a family, and continued his studies at the U-of-D where he also obtained his law degree.

Jack worked as a Certified Public Accountant for Arthur Anderson, but spent most of his career as vice-president of legal and financial affairs for a cutting-tool company in Troy, Michigan. He co-owned a small manufacturing company before retiring and moving to Beaver Island in 2000, where he helped run a local Island business. He served four years as Township Supervisor on the Island, while also donating much of his time and talent to the development and operation of the Beaver Island Community Center. Jack remained a licensed attorney in the state of Michigan for 50 years, sharing his good humor and pro bono expertise with Island residents.

Jack married Judy Taack-Lanier in 2000, after his first wife of 40 years (Dorothy Herzog Gallagher) preceded him in death in 1995. He remains the beloved and memorable father of 7 children, 4 stepchildren, 22 grandchildren, 15 great grandchildren, and many nieces and nephews. He was known for his wry sense of humor, good heart and generous spirit—even though he was an Irishman that never drank alcohol.

A brief “remembrance/celebration of Jack’s life” and “story-telling session” will be held at the Beaver Island Community Center on Friday, January 24th for family and friends from 5:00 to 7:00 p.m. Light drinks and snacks will be shared.

A Funeral mass for Jack will take place the following morning on Saturday, January 25th at 11:00 a.m. at Holy Cross Church. Co-Celebrants will be Father Jim Siler and Father Pat Cawley (who married Jack and Judy in 2002). For those who cannot attend in person, the mass will be simulcast live and made available at the following link: beaverisland.tv Following mass, there will be a luncheon for family and friends at the Community Center—with the family’s special thanks to Jack’s beloved Beaver Island residents who make this deliciously-warming and caring event possible.

In recognition of the many years Jack voluntarily handled the financial and legal affairs of the valued non-profit that now sits At the Heart of a Good Community—the family requests that donations in his memory be given to support the Beaver Island Community Center (PABI).

Jack’s family asks that you please ignore the request for flowers that appears below Jack’s photo and at the bottom of the obituary.

Arrangements are in the care of the Charlevoix Chapel of Mortensen Funeral Homes. Sign his online guestbook www.mortensenfuneralhomes.com

Upcoming Events at the BIC Center

Add BIC Center to your Homescreen!